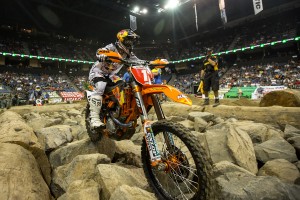 Taddy Blazusiak is the favorite heading into the race, with two wins in the previous four rounds - Photo: Drew Ruiz[/caption]

Some of the best EnduroCross riders in the world will take to the track in Colorado this weekend for the Denver EnduroX. The motorsports competition, set for October 6, will serve as the fifth round in the AMA EnduroCross series.

Taddy Blazusiak is the favorite heading into the race, with two wins in the previous four rounds. His main competition will come from Colton Haaker, the champion from Las Vegas, and Mike Brown, the X Games gold medalist.

Brown is fresh off of a stint with Team USA at the Motocross of Nations in Belgium. While some of his teammates struggled, Brown put forth a strong performance for the American squad. According to Dirt Rider Magazine, he walked away with an individual win in his E1 class race as well as a first place finish in a test competition. Brown's teammate at the Motocross of Nations, Taylor Robert, is also coming from a strong performance in his previous races and looks to challenge for a podium position.

The Denver track has been constructed in the National Western Complex and will feature a diverse range of surfaces. Cycle News reports that dirt, rocks and logs are all a part of the indoor raceway, along with a pond and an extended wood pile section.