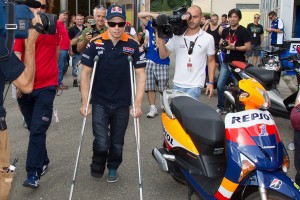 Casey Stoner will look to return to the MotoGP circuit in Motegi, less than two months after he was sidelined with a broken ankle during the Indianapolis round.[/caption]

Australian racer Casey Stoner will look to return to the MotoGP circuit in Motegi, Japan, later this month, less than two months after he was sidelined with a broken ankle.

"I've been resting, having some physio and following doctor's orders to recover," Stoner said on his official Repsol Honda blog. "The good news is that I feel I can race in Motegi and will be rejoining my team next week and I can't wait to get back on track."

Stoner injured his ankle in a crash at the Indianapolis Motor Speedway in August. He will travel with the Honda team to Motegi, though the final call on his health won't be made until a date closer to the race.

His return could be good news for Honda teammate and championship contender Dani Pedrosa, reports BBC. Pedrosa is currently battling with Jorge Lorenzo for MotoGP title, and having Stoner back in the mix could change up the points standings.

Stoner, the reigning world champion, could finish ahead of Lorenzo in some of the remaining rounds, robbing him of some much needed points in the motorsports standings. With only four races left in the MotoGP championship, the competition is tight, and the Motegi results will help to set the table for the rest of the season.