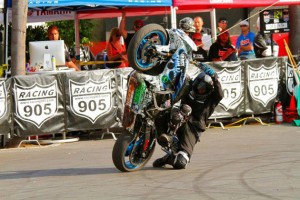 Bill Dixon walked away with the XDL Championship by a three-point margin.[/caption]

The finale of the XDL Championship Series saw breakout star Luke Emmons steal the show in front of the Portland crowd and win the event. But it was Bill Dixon who walked away with the overall championship by a three-point margin, capping off one of the tightest title races in motorsports history.

The XDL Series describes itself as the premier stunt riding championship in the world. A typical competition is comprised of a several different events, including the Circle Challenge, Drift Battle, Wheelie Race and the battle for the Sickest Trick.

Dixon secured his fourth straight XDL Cup Championship after a consistent season that saw strong performances in the Circle Challenge across competitions. While he admitted that he didn't come into the season as prepared as he should have, he is ready to train even harder to battle for a fifth title in 2013.

Emmons won the Portland event for his second overall victory of the season, boosted by a first place finish in the Wheelie Race and a third place performance in the Circle Challenge. He edged out Chris McNeil, who finished second overall in the event after winning the Sickest Trick competition.