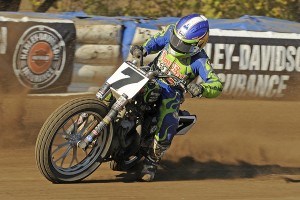 A stunning come-from-behind victory made for a memorable Santa Rosa Mile this past weekend, as Sammy Halbert overcame a five-second deficit to win his fourth motorsports race of the season.

Bryan Smith, who won the previous mile-track race at Springfield, Illinois, pulled out to an early lead. The Kawasaki rider was the favorite through the first 20 laps of the race, building up a five-second cushion over the rest of the field. But Halbert chipped away at the lead before taking advantage of an opening and pulling ahead with only five laps remaining.

"In the beginning, I was playing cat and mouse with Bryan [Smith]," Halbert told AMA Pro Racing "Once I passed him, I just kept looking back and saw the guys catching me but I adapted and overcame it. It was a great win. I loved coming out here to Santa Rosa and really want to thank all the great fans."

After Halbert passed Smith, the Kawasaki rider continued to slow his pace. Smith's decline left the door open for Jared Mees, who battled back from the 13th position to take second. Smith ended up in third place after barely edging Jake Johnson and Robert Pearson at the finish.