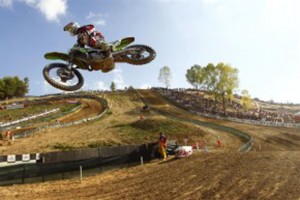 Germany won its first ever title at the 66th annual Motocross of Nations, ending a seven-year streak of American championships in the motorsports event. Belgium came in second, with Team USA finishing third.

"Our goal was to get on the podium and we had a hard fight with team Belgium, and this is history for us and the whole team," Roczen told Cycle News. "We will definitely enjoy it next year with the 1-2-3 number plates."

According to ESPN, the American squad struggled out of the gate, with several riders having difficulties in the deep sand of the Belgian track. Team members Ryan Dungey, Blake Baggett and Justin Barcia found themselves in the seventh overall position after the first day of racing, but a late surge on day two pushed the Americans into a podium position.

Italy's Antonio Cairoli capitalized off a strong qualifying round to grab the top spot in the first race for MX1/MX2 riders. Dutch rider Jeffrey Herlings, who is a sand specialist, was the victor in the MX2 open, and Cairoli grabbed another win in the final MX1 open race.