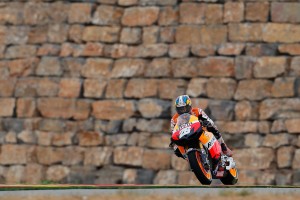 The MotoGP championship race got much closer after a dominant win by Dani Pedrosa.[/caption]

The MotoGP championship race got much closer after a dominant win by Dani Pedrosa.

The Honda rider earned his fourth motorsports win of the season in convincing fashion, gaining the lead during one of the early laps and then holding on for a 6.4-second margin of victory over Jorge Lorenzo. The two Spaniards got out to an early lead on their home track and never looked back, dominating for most of the race.

"I was thinking to try for the win at the beginning of the race and if that was not possible then second place was the best possible result for the Championship," said Lorenzo. "Dani had a better pace in the end, I was stronger at the start then little by little I was a bit slower, the tires were slipping a lot and I couldn't follow him."

While Pedrosa had a firm grasp on the top spot, the battle for third was much closer. Ben Spies, Cal Crutchlow, and Andrea Dovizioso were all in contention for the final podium position, with Dovizioso eeking out the fastest time of the three on the final lap.