Wet Conditions Mark The Start Of The Aragon Grand Prix 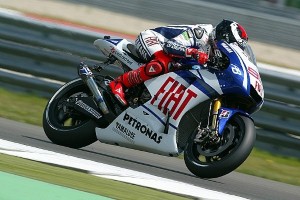 The Aragon Grand Prix is scheduled for Sunday, September 30, and the qualifying motorsports rounds have already gotten underway despite wet conditions. The Spanish track is the host of the 14th round of the 2012 season. With only five races remaining on the MotoGP circuit, current standings leader Jorge Lorenzo is looking to build upon his 38-point advantage in the rankings.

So far, Lorenzo and his Yamaha teammate Ben Spies have had a strong start to the weekend. Spies had the top qualifying time on a wet track, while Lorenzo's test laps put him in third. Finishing second was Honda's Dani Pedrosa, who is also Lorenzo's main competition for the MotoGP world title and is currently second in overall points."Aragon has not been the strongest track for us in the last two years, but I think we have found something in recent testing which will help us to be more competitive here," said Lorenzo. "We will try to make a good show for all the Spanish fans who come to see us and we will try to win." The Yamaha teammates may be two of the favorites going into the weekend, but they will face some tough competition. Pedrosa, Nicky Hayden and Andrea Dovizioso had top-five qualifying times and have each had a successful year thus far. They will look to build on that with a strong showing in Aragon.