Sportbike Closes Out Season In Miami 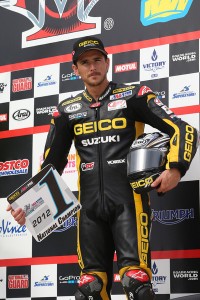 The star of the day was Suzuki rider Martin Cardenas who clinched the 2012 Daytona Sportbike title with a strong overall performance - Photo: Brian J Nelson[/caption]

The sportbike season continued this past weekend, as some of the motorsports' best riders hit the track at the Homestead-Miami Speedway.

The star of the day, however, was Suzuki rider Martin Cardenas. Cardenas clinched the 2012 Daytona Sportbike title with a strong overall performance.

According to Cycle News, Cardenas came into the races at Homestead-Miami 83 points ahead of Dane Westby. Despite a strong second place overall finish by Westby, Cardenas finished with a 76-point lead and claimed the crown.

"The championship was great for us. We took advantage of the points we had," Cardenas told Ultimate Motorcycling. "We came here to Miami with the mission to win the championship. I focused on trying to clinch it, and I'm very happy."

Cardenas won the Sportbike championship in 2010. He grabbed seven event wins en route to winning the title this season, and his strong finish helped lead GEICO Suzuki to the class championship as well.