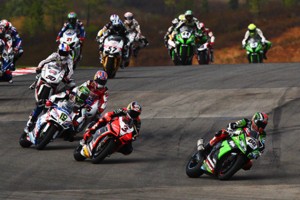 An unexpected win by Tom Sykes and a crash by Marco Melandri in Portimao drastically changed the outlook of the World Superbike standings.[/caption]

An unexpected win by Tom Sykes and a crash by Marco Melandri in Portimao drastically changed the outlook of the World Superbike standings.

Melandri and Max Biaggi were considered the favorites, with less than 10 points separating the two before Portimao. But Melandri crashed in the first lap of the day and had to be taken to the hospital to monitor his injuries, and Biaggi cruised to a third place finish. The Aprilia rider battled through tricky weather conditions, an interrupted race and some other motorsports obstacles to continue his consistent season.

The only other rider who could have challenged the top two in these final rounds was Tom Sykes, and a first place finish in the first moto put him in position to do just that. However, his Kawasaki bike had an engine failure during the second race of the day, and Sykes was unable to finish the moto. Biaggi took advantage and came in fourth place, giving him the overall win for the day and a comfortable 30-point lead over Sykes.

"Considering these difficulties and a lot of contact with the other riders, I'm happy with a fourth and third place which reconfirm my lead in the standings," said Biaggi. "Now we'll begin preparations for the last round in Magny Cours, as always putting forth our best effort."