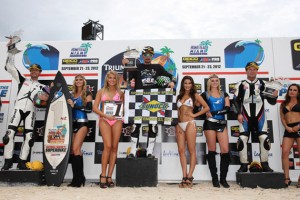 Josh Hayes went out in tricky conditions on the Homestead-Miami Speedway and took home the championship - Photo: Brian J Nelson[/caption]

According to Cycle News, the track was a bit damp and still drying at the onset of the race. This made things difficult for riders, who faced a tough pre-race decision over which motorcycle tires to use. Cautious riding marked the beginning of the race, as riders who chose tire combinations designed for a wet track took an early lead. As the raceway continued to dry out, Hayes stormed ahead and ended up taking a decisive victory.

"It's been a pretty incredible year," Hayes said to SpeedTV. "Every single race win feels so good. And if you get those the way that you want to, the championship kind of takes care of itself. Fortunately, I've been able to do that and we're going to continue doing it for as long as we can into the future."

Homestead was the site for Hayes' 30th career victory, which capped off a big season for the 37-year-old. He finishes over 100 points ahead of his next closest competitor, Blake Young. Young opted not to start the first Miami race due to the track conditions, which gave Hayes the win even before the motorsports event kicked off.