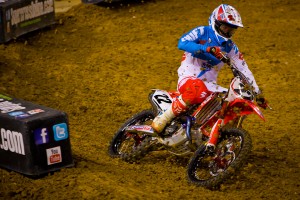 Chad Reed will make his return to racing at the Monster Energy Cup - Photo: Frank Hoppen[/caption]

Chad Reed, the two-time Supercross champion, will make his return to motorsports at the Monster Energy Cup on October 20.

The Honda rider will look to return back to championship form. Reed has 41 Supercross class wins in his career and is one of only two racers to win Supercross events in nine seasons.

Reed crashed on February 18 at the Dallas Supercross and suffered from numerous injuries. ESPN reports he tore his ACL, broke four bones and injured one of his vertebrae. He had entered the race as one of the top riders in the sport, but the extensive damage meant he faced months of recovery and rehabilitation.

"On race day, it will have been eight-plus months since I have raced," said Reed. "It's been a lot of work with rehab, but I'm excited to get back to racing and to have my fitness at 100 percent."

The 2012 Monster Energy Cup will be held at the Sam Boyd Stadium in Las Vegas. The races are offering some of the biggest payouts of the season, and any rider who wins all three of the main events at the cup will walk away with a $1 million prize.