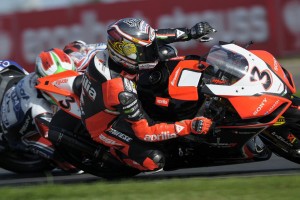 Max Biaggi now leads Sykes by 30.5 points and Melandri by 38.5 with one race remaining.[/caption]

The penultimate round of superbike racing in Portimao, Portugal, saw some unexpected finishes from the world's top motorsports riders.

Tom Sykes won the first moto, which was interrupted for an emergency cleaning after a crash spewed oil across the track. After the break, Sykes battled his way to the front of the pack and managed to finish just ahead of Ducati's Carlos Checa. Sylvain Guintoli, Max Biaggi, and Brett McCormick rounded out the top five.

Marco Melandri, who was just beyond points leader Max Biaggi in the standings, suffered a crash in the first lap after making contact with Biaggi. Melandri was then involved in some unavoidable collisions with other riders and had to be taken to a nearby hospital for tests.

Aprilia's Eugene Laverty took the victory in the second race, leading the pack from start to finish. Jonathan Rea finished in the second spot while Biaggi claimed third. This left Biaggi's main competitors unable to finish the race, with Melandri out with his injuries from earlier in the day and Sykes forced to stop due to a technical problem, according to Cycle News.

The 3-4 finish by Biaggi, combined with inconsistent performances from Sykes and Melandri, puts the Aprilia rider firmly in the top spot in the standings. Biaggi now leads Sykes by 30.5 points and Melandri by 38.5 with one race remaining.