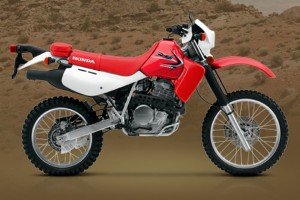 The Honda XR650L has been a staple of the dual purpose bike class for years.[/caption]

When it comes to dual sport motorcycles, Honda is the brand to beat. Not only did the company help popularize dualies, but the XR650L has been a staple of the dual purpose bike class for years. So, Honda released a 2013 model, but there is only one difference compared to the 2012 XR650L - a new decal on the fuel tank.

A lot of my friends are excited about the 2013 model, because it marks a push for dual sport bikes, which haven't been very popular lately. These motorcycles are great for people who don't have their own space to ride or a way to transport their bikes to local tracks. They can just hop on the motorcycle and ride there. With an estimated 52 MPG fuel economy, riders don't have to worry about refueling the 2.8-gallon tank en route as long as they live with 150 miles of their track of choice. There's even a 0.6-gallon reserve, just in case, and the bike meets all of the federal emission regulations. 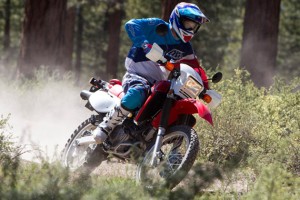 13-inch ground clearance opens up a world of possibilities for off-road riding.[/caption]

This bike is one of the larger dual sport models, with a seat height of 37 inches, so it's great for taller riders. Since it's so big, this means larger tires than other models - 18.5 inch wheels support the frame. This gives you plenty of choices if you want to use a different set of tires. You might want to explore this option, as a 13-inch ground clearance opens up a world of possibilities for off-road riding.

While this is a good bike, there's not much reason to spring for a new model. You might be able to track down a 2012 XR650L at a dealership for a discounted price, since it's the time of year when dealers are trying to clear out their inventories. Plus, the 2013 version isn't available yet. If you don't want to wait, you can get a used 2012 dual sport bike and basically have the same bike anyway.