Previewing This Weekend At Portimao 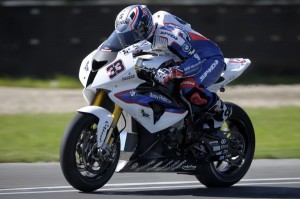 Marco Melandri is in second place in the World Superbike standings heading into this weekend's race in Portimao.[/caption]

Portimao, which is widely regarded as one of the most beautiful motorsports venues in the world, could see some extremely tight contests this year. The top eight riders all finished the qualifying round within a second of each other.

Marco Melandri is in second place in the World Superbike standings heading into this weekend's race in Portimao, Portugal, but after the first day of qualifying he looks like the one to beat.

The penultimate round of the FIM Superbike World Championship looks to be a hotly contested affair, as riders attempt to make one last push in the standings before the season comes to a close. Melandri's opening time was closely followed by Eugene Laverty, Tom Sykes, and Jonathan Rea. Max Biaggi, who currently is at the top of the Superbike standings, qualified in the seventh position.

The BMW rider won the second moto on the Portuguese track last year and is looking for a repeat performance.

"I will approach the weekend as I always do," said Melandri. "In preparation I trained a lot back home and in Portimao I will try to enjoy the ride. The whole team and I will do our best and just try to be consistent and fast in both races."