World Superbike Title Chase Going Down To The Wire 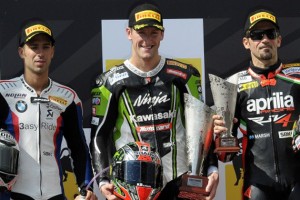 The championship is down to Marco Melandri, Tom Sykes, and Max Biaggi - Photo: Fabrizio Porrozzi[/caption] Only two motorsports rounds remain in the battle for World Superbike Champion, and three riders have a legitimate chance to win the title.

Veteran Aprilia rider Max Biaggi is currently on top of the standings with 318 points, but BMW's Marco Melandri is less than 10 points behind at 308.5. Trailing the top duo is young English phenom Tom Sykes, who, with 291.5 points, has an outside chance at the crown. The two rounds and four motos remaining have a total of 100 points up for grabs."I certainly expect tough races," Melandri told SuperSport. "There are just two rounds to go and the Championship is still very open for quite a few riders, so it will be not easy but very interesting." The quest for the championship has gone back and forth between Superbike's top racers all season. Melandri led for much of the year, but a poor showing in Germany last week gave the lead to Biaggi. The penultimate round will take place this weekend at the Autodromo circuit in Portimao, Portugal. A week later the season's grand finale will get underway at Magny-Cours in France. In addition to the race for individual champion, three manufacturers also have a chance at the crown. Aprilia is currently in the lead, with BMW close behind. Ducati and Kawasaki are also in the title hunt.