Ontario EnduroCross Comes Down To The Wire 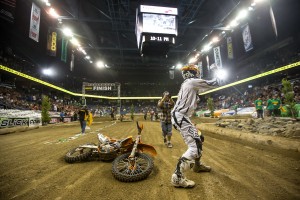 Taddy Blazusiak's victory was his second in four races this season, making him the first double winner of 2012 - Photo: Drew Ruiz[/caption]

It was a back-and-forth battle for the fourth round of the GEICO AMA EnduroCross Championship on Saturday, with Taddy Blazusiak emerging as the winner after a tight motorsports race.

The Polish driver held off second place finisher Cody Webb for the majority of the race, and fought back after Webb grabbed a lead midway through the race. Cycle News reports that despite suffering a few bobbles throughout the race, Blazusiak managed to surge to the front of the pack with just four laps left.

Webb and Blazusiak gave it their all in the final laps, with Ultimate Motorcycling reporting that many of the final lead changes came in the difficult wood chips section of the track.

The competition was just as fierce behind the top two riders. Justin Soule, Kyle Redmond and Taylor Robert rounded out the top five finishers, with Soule surging from behind to grab the final podium spot. The Kawasaki racer led the trio in crossing the finish line about 20 seconds behind Webb.

After a two month break for the summer, Ontario marked the return of EnduroCross. Blazusiak's victory was his second in four races this season, making him the first double winner of 2012 and keeping him in first place in the points standings.