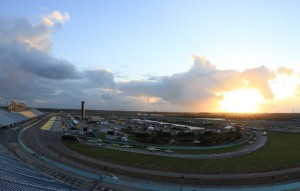 The Homestead-Miami Speedway will host the penultimate round of the 2012 AMA Pro Road Racing season this weekend - Photo: Tami Kelly Pope[/caption]

The Homestead-Miami Speedway will host the penultimate round of the 2012 AMA Pro Road Racing season this weekend.

Miami hasn't hosted an AMA motorsports event since its inaugural race in 1996. For its return, Pro SuperBike, SportBike and SuperSport will all have races important to the championship battle.

Riders and manufacturers have been in the Florida area all week promoting the sport's return. Companies gave away motorcycle accessories, posters and tickets to spark interest, and certain teams had meet-and-greets with some of racing's most popular athletes.

Josh Hayes is the favorite to lead the way in SuperBike racing. The two-time defending champ has dominated for much of the season, winning a record 13 races and building a large lead in the points standings. His main competition is Suzuki's Blake Young, who currently sits in second place but has struggled recently. Young will look to right the ship in Miami to close out the season strong.

In the SportBike division, Martin Cardenas comes into the event with a comfortable points lead and a chance to lock up the championship. Cardenas posted the second-fastest SportBike time in Miami during testing in March, so he will look to continue his solid performance on the Florida track.