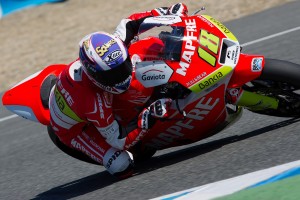 Nico Terol, the last ever 125cc class winner, has signed an agreement with Aspar to stay with the motorsports team through 2014.[/caption]

Nico Terol, the last ever 125cc class winner, has signed an agreement with Aspar to stay with the motorsports team through 2014. He will race in the Moto2 category.

Terol raced for Aspar in the 125cc class for two seasons, finishing as the runner-up in his first year before taking the championship title in 2011. That was the last run for 125cc, and he moved to Moto2 at the start of 2012.

"This year has been a little more tricky than we'd hoped but it has been a learning process in Moto2 and we are getting ready for next season," said Terol. "To have my situation sorted now and to know I will be with the same team is an extra motivation for me to give my best in the final few races of the current championship."

With five races left in the current Moto2 season, Terol and his team will turn their attention to continuing to improve. According to Crash.net, the rider has managed to score points seven times in 2012, but he has failed to finish better than 12th.

Terol will be joined on the 2013 team by Jordi Torres, who came to Aspar in the middle of this season.