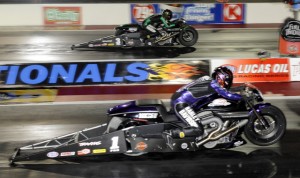 The motorsports event was held on the zMAX Dragway at the Charlotte Motor Speedway. Rain delayed the start of the race, but even a wet track couldn't stop Harley-Davidson bikes from dominating the event.

The win was Hines' fifth of the season and 30th of his career, according to the NHRA. That ties him with his older brother, Matt, for class wins. He narrowly edged out his Screamin' Eagle/Vance & Hines teammate Ed Krawiec by 0.0042 seconds in the final race.

"Both Harley V-Rods were really evenly matched all weekend, so I knew it would take a good start to win the final, and it was a great race," Hines said to Ultimate Motorcycling. "Now that we are into the Countdown events, we came in here feeling like we had to defend our undefeated record in the regular season. Everything has reset and we need the points, so this was a great start for the team."

Pro Stock Motorcycles will continue the NHRA season this weekend at the Texas Motorplex in Dallas.