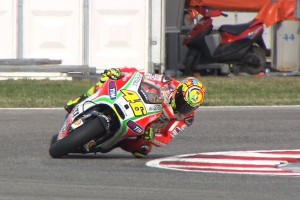 Ducati was on the track for a one-day test with its motorsports riders Valentino Rossi and Nicky Hayden.[/caption]

The race at San Marino's Misano racetrack may be over, but the testing is just beginning for some of MotoGP's biggest stars.

Ducati was on the track for a one-day test with its motorsports riders Valentino Rossi and Nicky Hayden. The manufacturer was testing electrical work and different frameworks. Rossi riding bike with characteristics similar to what he had during the San Marino Grand Prix last weekend, where he finished second.

While Rossi was ambivalent about some of the changes, his teammate was more enthusiastic.

"I felt better with it, for sure," said Hayden. "I had more confidence because there's better front grip for braking into the corners, and because of that, also better turning. I think it's certainly a step in the right direction, straight away, and I'm happy with the work Ducati has done...I'm quite happy, and at Aragon we'll start to work on the setup."

Hayden, who only recently returned from an injured right hand, only took a few laps around the track. He will be the only one of the pair returning to the team in 2013, as Rossi has already reached an agreement to move to the Yamaha racing team. Andrea Dovizioso will be joining Ducati to take his place.