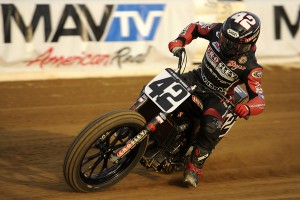 Bryan Smith's prototype Kawasaki was too fast for the field at the Springfield Mile this weekend - Photo: Dave Hoenig[/caption]

Bryan Smith's prototype Kawasaki was too fast for the field at the Springfield Mile this weekend, and the veteran rider squeaked past Sammy Halbert to take the victory.

Hurricane Isaac delayed the race two weeks, but when the riders finally took the track at the Illinois State Fairgrounds for the 25-lap motorsports event. Smith led for most of the race on his new Kawasaki bike, but Halbert rode a near-perfect race behind him, reports Cycle News. Ultimately Smith crossed the finish line first, edging out Halbert by 0.041 seconds.

"It feels great," Smith told The State Journal-Register. "To come back and win this, it's kind of 'revenge on the Springfield Mile' for myself. It was more personal in my head to not give this thing away again."

According to Cycle News, Kawasaki bikes won each of the qualifying heats and the final race - the first time that has happened at the Springfield Mile. Smith was riding an unrestricted bike, which may have contributed to his results.

The flat track racing standings are closer than ever after the weekend's results. Jared Mees' third place finish at Springfield keeps him on top of the rankings, just 12 points ahead of Jake Johnson and 23 ahead of Halbert. There are still three races left in the AMA Grand National season.