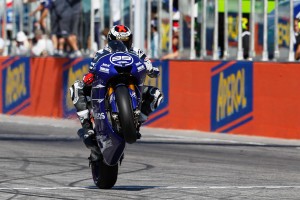 Jorge Lorenzo took the win at the San Marino Grand Prix this weekend, and aims to claim the 2012 World Championship.[/caption]

Jorge Lorenzo took the win at the San Marino Grand Prix this weekend, and in the process he put himself in a strong position to claim the 2012 World Championship.

Lorenzo led from the start of the motorsports race and dominated the field. His main rival for the MotoGP crown, Dani Pedrosa, who crashed out after a series of issues stalled his start.

There was confusion at the beginning of the race for the Honda team, delaying the start for Pedrosa. One of his sport bike tires was locked, and once the brake issue was resolved the Spaniard was forced to start from the back of the grid. The riders were only a few turns in when Hector Barbera crashed and wiped out Pedrosa, eliminating him from the race.

"It's been a very tough weekend because Dani and I have been very close in the qualifying and the warm up. Unfortunately today he had really bad luck," said Lorenzo. "This was really unfortunate for him. In Holland we were unlucky and today he was unlucky, anything can happen in these races."

The hometown favorite Valentino Rossi took second place, racing on a Ducati bike in Italy for the last time. Alvaro Bautista, Andrea Dovizioso and Ben Spies rounded out the rest of the top five.