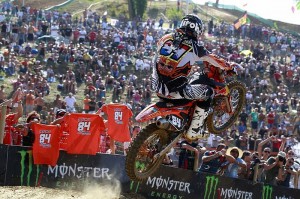 Italian native and home crowd favorite Cairoli won the MX1 title after finishing first in each of his races. Cycle News reported that it was his eighth sweep this season and his 53rd career MXGP victory.

MX2 was much of the same, with Dutch rider Jeffrey Herlings taking his first world championship. The 17-year-old fought through a tough 2012 season to finish strong and win the first title for a Netherlands native in almost 20 years.

"I had many ups and downs during the whole season, but I managed to find the way to get through everything and win the title," Herlings told Cycle News. "I am really happy to have had my team behind me because they have been really supportive all the time."

With one more motorsports event left in the MX1 and MX2 season, second and third place are all but set as well. According to Superbike News, Clement Desalle and Gautier Paulin are likely to grab podium spots in the MX1 class, while Tommy Searle and Jeremy van Horebeek are comfortably in the top three of MX2.