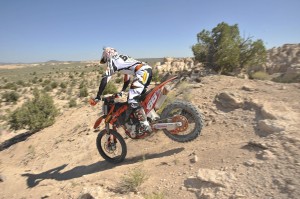 Kurt Caselli bounced back from injuries to win the Nevada Hare & Hound on Saturday, September 8. The motorsports event was the eighth round of the AMA Racing National Hare & Hound Championship.

In his first race back to the AMA Racing circuit since suffering a broken shoulder and knee injury several weeks ago, Caselli managed to jump out to an early lead and then never looked back. Cycle News reports that it was the Red Bull rider's fifth win of the year.

"It feels really good to come back to the series and take the win," said Caselli. "My shoulder and my knee felt good and I feel like I am back to top form. I am still a few points back in the series but I know with a couple rounds left that the championship is still within reach, and that is definitely the end goal."

Caselli's next race will be the International Six Days, where the racer is serving as captain for Team USA. After that it's back to the Hare & Hound circuit, where he will attempt work to make up the 13-point deficit he has to points leader David Pearson.