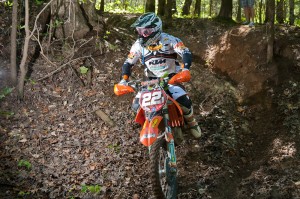 Charlie Mullins returned to the Enduro circuit with a win at the Lead Belt National Enduro in Missouri. - Photo: Shan Moore[/caption]

After losing most of the summer season to a broken elbow, Charlie Mullins returned to the Enduro circuit with a win at the Lead Belt National Enduro in Missouri.

The motorsports rider had good conditions for his return, where he won four of the six races.

While other riders struggled over the sandy portions of the track, Mullins took advantage of his dirt bike gear to dominate those sections. Cycle News reported that he closed out the day with a strong performance on all tracks, despite a brief stumble on the rocky track of the fifth race when he banged his knee on a tree stump.

"It feels great to take a win," said Mullins. "This has been a very challenging season for me and to finally feel like I am back on track is a great feeling. Everything worked well today and I am looking forward to the final few rounds."

KTM swept the podium, with Russell Bobbitt and Steward Baylor taking the second and third spots behind Mullins.

There are two rounds remaining in the AMA National Enduro Series, and Baylor and Bobbitt are both in strong positions to battle for the crown. Baylor sits at the top of point standings and could wrap up the title at the next race. He will be challenged by current second place rider Mike Lafferty and the third place Bobbitt.