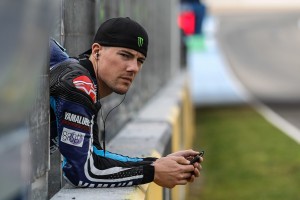 Although Ben Spies has hinted at retirement recently, this new contract confirms that he will stick around for at least one more year.[/caption]

Iannone will be stepping up to MotoGP from Moto2 racing, reports The Guardian. The U.K. newspaper also highlights Spies rough 2012 season with the Yamaha factory team, where the rider has suffered from several motorcycle malfunctions. Although Spies has hinted at retirement recently, this new contract confirms that he will stick around for at least one more year.

Last month Ducati announced that racers Andrea Dovizioso and Nicky Hayden will anchor the 2013 factory team. With Spies and Iannone added to the mix, the manufacturer solidifies its commitment to developing a strong team for MotoGP racing.

Ducati's partnership with Pramac Racing sets up the satellite team that Spies and Iannone will compete under. While they will have all of the latest technology and motorcycle gear from the manufacturer, the riders will be the equivalent of Ducati's junior team, with Dovizioso and Hayden remaining the two stars. This agreement will enable further development of the Italian bike, including the highly touted Desmosedici MotoGP project.