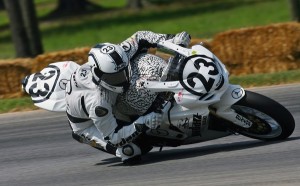 Aaron Yates has been out of action since he suffered from a broken leg at the California Speedway in March of 2010.[/caption]

It's been a long road back to the Superbike Series for Aaron Yates, but if all goes according to plan he will be making his triumphant return at the Homestead-Miami Raceway.

Yates has been out of action since he suffered from a broken leg at the California Speedway in March of 2010. He will be joining the EvanSteelPerformance.com team at BMW, who he tested with at the end of August.

"I went and met the ESP guys, and rode the BMW for the first time, and I really liked it," said Yates. "I think the S1000RR is a great bike, and a great package to go racing with, especially with the rule changes for electronics coming next year. The bike had a good feel to it, and I am really looking forward to being in the AMA Pro paddock again."

Though he rode as a wild card entry at the Indianapolis Grand Prix, the Miami race will be Yates' official return to the AMA Superbike class since his broken leg. He tried to return from his three-season absence sooner, but faced issues coordinating with the ESP BMW team and getting a new AMA license, reports Road Racing World.

The Big Kahuna motorsports event in Miami is taking place on September 21 and 22.