A Record Day For Josh Hayes In New Jersey 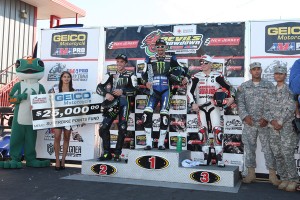 Josh Hayes dominated the field in New Jersey this past weekend to claim his record 13th win of the season.[/caption]

Josh Hayes dominated the field in New Jersey this past weekend to claim his record 13th win of the season. After roaring out to an early lead, Hayes built up his time cushion to 22 seconds over second place rider and Yamaha teammate Josh Herrin.

"When I got this opportunity at Yamaha I couldn't imagine I'd be here now. I'm still pretty awestruck by it," said Hayes. "When I graduated high school I had just bought my first street bike and to think that one day I'd be here is pretty amazing. I hope my parents are proud. I'm proud of what I've accomplished and I'm going to keep working hard at it and do it for as long as I can."

Hayes racked up a number of records during the New Jersey motorsports event. He tied the record for most consecutive poles with 11 and most consecutive victories in the series, with nine wins. Cycle News also reported that it marked his 30th career win, only two behind Miguel Duhamel for second all-time.

The win extended his lead in the standings to 98 points over Blake Young. With only one event left in the season, Hayes is looking to clinch his third consecutive AMA Road Racing championship in the finale at Homestead later in September.