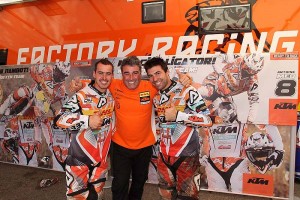 Cycle News reported that France's Christophe Nambotin and Antoine Meo secured the E3 and E1 class championships, respectively. Both racers rode for the Red Bull KTM team in the 13th and 14th rounds of the World Enduro.

Nambotin won eight of the nine tests during Saturday's races to take the win before the motorsports event was even complete. The victory was his 12th out of the 13 rounds thus far.

"I love my new bike and I'm happy with the KTM team," Nambotin said. "I feel very strong right now. I will now go out tomorrow and try to take victory in round 14."

According to KTM, Meo entered the second day of racing only needing a top five finish to win the championship. His second place overall finish earned more than enough points to distance him from Rodrig Thain, who is currently second in the standings.

There is only one race left on the schedule, with the E2 class title chase still wide open. Another Frenchman, Pierre-Alexandre Renet, currently leads the field by 11 points.