Looking Ahead To WSBK In Germany 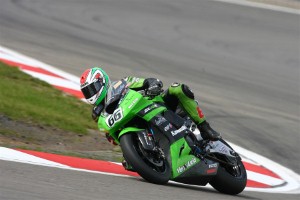 The World Superbike Championship will be decided this weekend at Germany's Nurburgring racetrack. Individual riders and manufacturers are going to battle it out for motorsports supremacy in the season's 12th round.

Points leader and BMW racer Marco Melandri leads a prestigious field of competitors, including Max Biaggi and Tom Sykes, who are both chasing the Italian in the standings. The top three will have to keep an eye on Carlos Checa and Jonathan Rea, both of whom still have a chance at the title.

"It is great to come to the BMW home round at NÃ¼rburgring leading the championship, but this could also mean even more pressure, because everybody will expect a good result," Melandri told SpeedTV in an interview. "I am sure it will be difficult races because Aprilia will work hard and try to get the lead back - but we will see."

Although Nurburgring has hosted the 12th round of superbike since 2008, neither Melandri nor Biaggi have ever had a first place finish on the track. Sykes, on the other hand, won on the German raceway less than a year ago. With good weather expected throughout the weekend, viewers are likely in for a battle royale among the top riders.