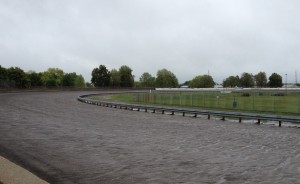 Heavy rains wreaked havoc on the course at the Illinois State Fairgrounds this past weekend, forcing multiple delays of the Springfield short track motorcycle races. Eventually, reports Cycle News, the decision was made to postpone the event for September 15 and 16.

The rain began Friday and continued into Saturday as remnants from Hurricane Isaac doused central Illinois. The weekend's events were briefly rescheduled for Sunday. But as more and more rain continued to drench the track, the races were again pushed back to Monday. Finally, the constant drenching of the track and area tornado warnings forced officials to reschedule the entire event for later in September.

"This is just a minor glitch in what is still expected to be an action-packed weekend of racing on back-to-back days at the Springfield Fairgrounds," said Dan Johnsen, director of AMA Pro Flat Track. "A big thanks to the IMDA for all of their efforts in getting the tracks prepped."

Labor Day weekend in Springfield was due to be an exciting one for the world of motorsports, but the races on the 15th and 16th should bring the same intensity. The famous Springfield Mile will be the highlight of the AMA Pro Flat Track Grand National events, and all are sure to provide great entertainment for spectators.