A Pair Of Sweeping Finishes At Steel City 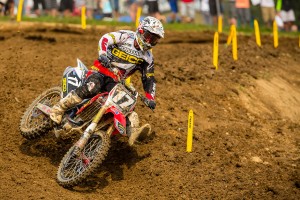 Eli Tomac posted the fastest time during the practice lap before the competition even began, and then finished with wins in both races - Photo: Frank Hoppen[/caption]

Spectators at Steel City Raceway were on hand to witness a dominant performance this past weekend as Ryan Dungey and Eli Tomac swept their races in the 450 and 250 classes, respectively.

Dungey wrapped up the 450 title several weeks ago, but that didn't stop him from claiming his ninth consecutive motorsports victory. He led for all 15 laps of the opening race, winning by a staggering 31 seconds. The second moto saw Dungey battle back from a poor start, eventually taking the lead in the 10th lap and holding off Mike Alessi for the win.

The 250 class saw some much tighter races, But Eli Tomac was the one to beat. He posted the fastest time during the practice lap before the competition even began, and then finished with wins in both races.

"It was the best day I could ask for," said Tomac. "I came and did what I needed to do, and now I'm within a moto of the points lead."

With only one race remaining in the 250 class, the title is up for grabs. Blake Baggett currently holds a 14-point lead over Tomac, who is only four points ahead of his Honda teammate Justin Barcia. Next weekend's inaugural race at Southern California's Lake Elsinore will decide the champion.