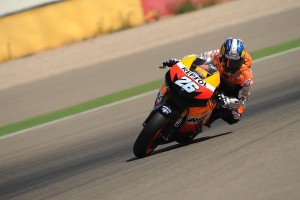 Dani Pedrosa put the rest of the MotoGP world on notice during the testing period at Spain's Aragon Motorland this week.[/caption]

Dani Pedrosa put the rest of the MotoGP world on notice during the testing period at Spain's Aragon Motorland this week.

The track had excellent weather conditions for the first two days of testing and Pedrosa took advantage of them, posting the fastest time on the circuit and breaking the existing lap record. The Repsol Honda rider has won his last two races and is currently second in the MotoGP Championship standings.

Joining Pedrosa was motorsports teammate Jonathan Rea, the replacement for injured Casey Stoner. He spent his test days trying to get used to the RC213V, which he has only recently begun riding.

"Today I was just getting a good feeling between me and the machine because it still feels very strange," said Rea. "I feel comfortable on the bike, the riding position is good, but I just need to understand how the traction control is working, what happens when the tires drop down and be more comfortable with the setup."

Honda wasn't the only team testing on the Spanish track. Ultimate Motorcycling reports that Yamaha riders Jorge Lorenzo and Ben Spies were also present, along with LCR Honda's Stefan Bradl. Lorenzo is currently 13 points ahead of Pedrosa in the standings, and both riders are sure to be closing out the season competing neck-and-neck for the title.