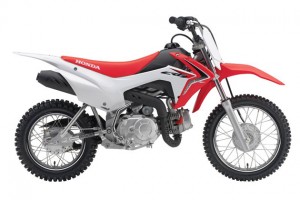 The 2013 Honda CRF110F is a great choice for young riders who have proven they can handle themselves on the track but aren't tall enough to sit comfortably on a larger ride.[/caption]

It's an unfortunate truth that smaller bikes mean less powerful engines, which leaves shorter riders in a lurch. Sure, they can race against comparable dirt bikes, but half the fun of riding is the rush you get from tearing around the track on a powerful motorcycle. There are a couple of choices out there for smaller and younger riders who want more power, including the new Honda CRF110F. This bike was produced to take the place of the CRF70F, but Honda took the replacement a step further and gave the engine a bit more oomph than its predecessor - 40cc more to be exact.

Despite the boost in power, the dirt bike's frame is still a manageable size for shorter riders. The seat is about 26 inches off the ground, and front and rear tires are smaller as well - 14 inches and 12 inches, respectively. The suspension's 3.9-inch travel and 3.4-inch shocks offer a smooth ride, which makes it a lot easier to get used to the track without being jostled around on every bump on the track.

The bike's electric start system and automatic clutch make it easier for riders to focus on other aspects of riding. This holds true especially when a rider takes a spill. It's a lot easier to learn to pick yourself up out of the mud when you can get your bike running again at the touch of a button. Once this is no longer an issue, the bike has a kick starter as well. The handlebar-mounted automatic clutch also makes it easier for new riders to get a grip on the best gears for riding since they don't have to focus their attention on the act of shifting itself.

The small dirt bike's power boost makes it a great choice for young riders who have proven they can handle themselves on the track but aren't tall enough to sit comfortably on a larger ride. It's also an excellent alternative for adult riders who are still learning the ropes of dirt bike racing, but are ready to take things to the next level. For younger riders, Honda has installed a throttle limiter so parents can control how fast their youngster is able to ride.