A Look Ahead To Springfield Short Track 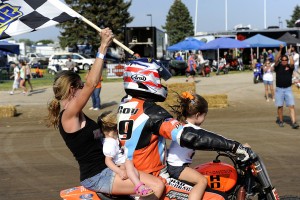 Willie McCoy, a previous winner of the Springfield Mile, will joined by a field full of other competitors hungry for the crown - Photo: Dave Hoenig[/caption]

Every sport has its own special signature event. For AMA Pro racing, some may argue that it's the Springfield Mile.

Held every year at the Illinois State Fairgrounds, the 25-lap race is during the AMA Pro Grand National Championship.

Bryan Smith, a two-time Springfield Mile winner, has had a solid year but only one first place finish going into this competition. He'll be joined by previous winners Willie McCoy and Dan Ingram, as well as a field full of other competitors hungry for the crown. But racing on a tight track at speeds of around 140 miles per hour, the title is anyone's to claim.

The mile race isn't the only motorsports event happening at Springfield this weekend. The short track will also host the Pro Grand National Championship.

Henry Wiles is the only active rider with a win at the Springfield short track, and he will be racing for a second this weekend. He'll be challenged by defending national champion Jack Johnson, as well as points leader Jared Mees. Both riders have had solid finishes at Springfield in the past, and their veteran presence ensures that this weekend's race will be an exciting one.