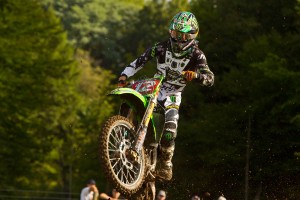 Blake Baggett is the favorite for winning the 250cc Steel City National as he guns for fifth victory of the summer - Photo: Frank Hoppen[/caption]

The Steel City National is a Labor Day weekend tradition, and its 2012 running kicks off the final stretch of the season for AMA Pro Racing.

Ryan Dungey has already clinched the overall title for the 450 Class but is targeting his ninth-consecutive win on the circuit. He captured the crown after Unadilla, where he battled from a tough start to win the race. The KTM rider is looking to close out a dominant season with two more first place finishes.

Last season saw Dungey and Ryan Villopoto trade leads at Steel City before Villopoto pulled ahead for the win. Villopoto's finish eventually helped him claim the overall championship. While there may not be as much on the line in 2012, the race still features some of the top talents in AMA.

The 250 Class has some tighter competition. Blake Baggett is the favorite as he guns for fifth victory of the summer. His consistent finishes have earned him a 24-point lead in the standings. However, he will need to watch his back, as Justin Barcia and Eli Tomac, who will both be racing this weekend, are within striking distance of the top spot.

This penultimate round of the championship is the last chance for motorsports fans on the East Coast to see AMA racing in action this season. Steel City Raceway has been a favorite track for riders and spectators for years, and this year's action is sure to be no different.