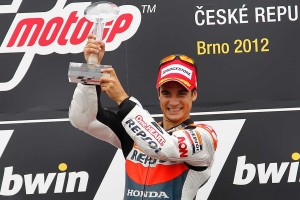 Rivals went head to head on the Brno track this weekend, as Dani Pedrosa edged out fellow Spaniard Jorge Lorenzo by less than two tenths of a second.

The two riders took advantage of 2011 champion Casey Stoner's absence to provide a thrilling show for motorsports fans. They went back and forth for the entire 22-lap race. Honda's Pedrosa moved ahead about halfway through the race and held on until the final two laps, when Yamaha's Lorenzo made his move into first. With only a few corners left Pedrosa made one final pass, ultimately crossing the finish line 0.178 seconds ahead of his countryman.

"Today was one of my best races in MotoGP ever, to win with a big gap is always nice, but to have a battle like today with Jorge, it's sometimes more rewarding," said Pedrosa.

Brno was the third victory of the year for the Honda rider, who previously had never finished better than second in MotoGP. The results cut Lorenzo's lead in the standings over Pedrosa to just 13 points with six races left.

Cal Crutchlow came in third for the first podium finish of his MotoGP career. Andrea Dovizioso and Stefan Bradl rounded out the top five.