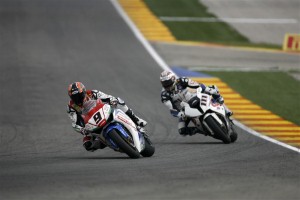 This weekend will mark an important first in the world of motorsports, as international bike racing will debut in Russia. Motorsport fans in Russia's population of over 143 million will finally have the chance to see a live event when the 11th round of the FIM Superbike World Championship take place from August 24-26.

Located about 80 kilometers (50 miles) outside of Moscow, the Moscow Raceway totals 3,931 meters (2.44 miles). While the course hosted a World Series car racing event in July, this upcoming race will be the premiere of its bike layout. A test session was held on Wednesday, August 22, in order to familiarize riders and officials with the track.

The weekend will also serve as an important round for this year's race to the championship, as Max Biaggi and Marco Melandri are separated by just 10.5 points in the standings.

"The Russian event is very important, not only for the Superbike World Championship but for motorsport in general," said Andrea Dosoli, Head of Race Operations. "It is amazing that Russia is given the chance to share the unique emotions that only motorsport can offer."