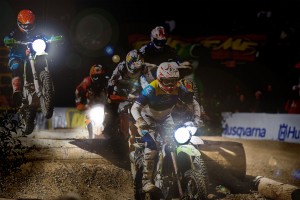 Citizens Bank Arena in Ontario, California, will go dark for a special race during the 2012 Geico AMA EnduroCross. Expert riders will participate in a special night race that will see the arena lights turned off for this one-of-a-kind motorcycle endurance event.

Baja Designs, which provides dirt bike parts like LED lighting, is the driving force behind the special event. Each participating rider will use Baja's battery powered Double Stryk lights on dirt bike helmets during the race. One of the premiere providers of race and off-road lighting, Baja will also be offering up a $500 prize for the winner of the dark run.

"The night race is always an awesome show for the spectators so we are excited to have it back for the Ontario, California, event," stated Mike Karsting, the vice president of events at Source Interlink, which owns the American Motorcycle Group. "The Baja Designs helmet lights have progressed to the point where they now provide enough light to ride so each rider will use two of those to illuminate their path".

A similar night race took place in November 2011 at the Las Vegas EnduroCross finals. The event is a fan favorite and will be open to the public.