Back Injury Will Keep Zach Bell Out For Season 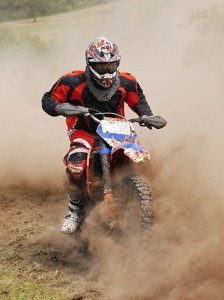 will miss the rest of the 2012 Lucas Oil AMA Pro Motocross Championship due to a back injury.

The 18-year-old fell last weekend in his second 250 moto at Unadilla in New York. He withdrew from that race after complaining of upper back pain, and doctors later discovered that he had compression fractures in two vertebrae.

"I came off the track and I really wasn't hurting that bad," said Bell. "I really thought it was just a muscle strain or pull. We went home and got some initial x-rays and they didn't see anything. We had another doctor look the next day and he saw the fractures."

Bell recently competed in his first two outdoor motorsports races after turning pro just a few weeks ago. He joined the professional ranks after winning all three motos at the AMA Amateur National Championships in Tennessee at the beginning of August. He signed on to become a Honda rider even earlier in the summer, which was the start of a very eventful summer for the American teen.

Bell will have to temporarily wear a back brace and faces a few months of rehabilitation. No surgery is required and he is expected to make a full recovery.