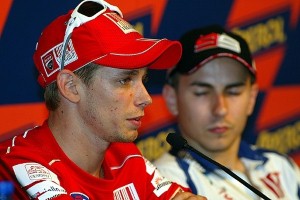 Defending World Champion Casey Stoner will undergo surgery on his ankle, dashing the racer's hopes for a repeat performance.

The 27-year-old Australian suffered from torn ligaments, bone damage and fractures after a crash in the qualifying rounds at the Indianapolis Motor Speedway. He raced less than 24 hours after the initial injury, finishing fourth in the Red Bull Indy Grand Prix. Stoner was on his way to Brno for the Czech Republic Grand Prix when his doctors insisted that surgery was needed.

He currently sits at third place in the MotoGP standings but admitted in a press conference that the surgery will effectively end his quest for another championship. Stoner, who announced his plans to retire in May, still intends to leave motorsports after this season.

"I can't wait for a fairy tale ending," Stoner said, when asked if the injury would affect his retirement plans. "This could happen next year if I stayed."

It is not clear when Stoner will be medically cleared to race again. He hopes to return for the end of the season, ideally in time for his home race at Phillip Island at the end of October.