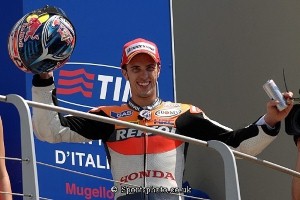 has reached an agreement that will partner the rider with the Ducati team for 2013 and 2014. Previously, the 26-year-old Italian rode with Honda and a satellite Yamaha team.

Dovizioso is currently in fourth place overall in the MotoGP standings. The 2005 125cc World Champion will join Nicky Hayden on the Ducati team as a replacement for Valentino Rossi, who is leaving to re-sign with Yamaha.

"Andrea's technical sensibility and test-riding abilities are of great value, as are his talent and determination," said Filippo Preziosi, general manager of Ducati Corse. "The knowledge that we will have him on our team and be able to count on his collaboration serves as an additional incentive to continue with the growth and development of our MotoGP project."

Ducati is well known throughout the world of motorsports for their top-of-the-line bikes and equipment. The company was founded in 1926 and has been actively participating in the racing world since the 1950s. Dovizioso is expected to join the team in developing the new Desmosedici bike and hopes to return it back to its winning ways - something known to be difficult, as many riders have trouble adapting to the unique Ducati design.