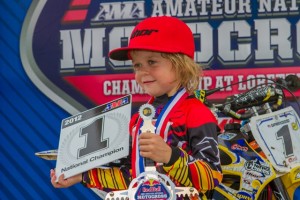 As many as 10 national motocross champions were able to take home the prestigious AMA national No. 1 plate this month thanks to the defeat one year ago of the "lead law" that banned the sale of kid's dirtbikes, the American Motorcyclist Association reports.

The 10 young riders under the age of 12 earned their awards at the 2012 AMA Amateur National Motocross Championships held July 30 to Aug. 4 at Loretta Lynn's Ranch in Hurricane Mills, Tennessee.

Cobra Motorcycles, which makes kids' competition motocross machines, saw a lot of that success. Cobra President Sean Hilbert said that his riders' titles wouldn't have happened without the defeat of the lead law.

"It is very clear that we would not have been at Loretta Lynn's without the lead law victory," Hilbert said. "The success was made that much sweeter due to the categorical exemption of motorcycles and all-terrain vehicles that made it possible, and obviously the AMA played a big role in that."

For Cobra, 2012 was a bright spot for another reason: the company's first AMA Amateur National Motocross Championship in the 65cc class.

Utah's Pierce Brown won a 65cc AMA national title for Cobra, which has been a longtime 50cc-class powerhouse. Brown won all three motos to sweep the 65 (7-9) Stock class.


"We introduced [the 65cc] model in the early part of 2012, and within a few months, we had a national championship under our belts. We're extremely proud of that accomplishment."
- Cobra President, Sean Hilbert

"We introduced that model in the early part of 2012, and within a few months, we had a national championship under our belts," Hilbert said. "We're extremely proud of that accomplishment."

"There were three things that came together to defeat the lead law," Hilbert said. "One was the fact that as a community, motorcyclists rallied together in a way that I've never seen on any single issue. Another was the AMA staff in Washington, D.C. They really knew how to navigate the waters of federal government, and who to see and how to see them. The third was the role of companies like Cobra and MX Sports -- strong local businesses that were able to demonstrate very clearly how the law was going to impact local economies."

The CPSIA, which went into effect on Feb. 10, 2009, banned the making, importing, distributing or selling of any product intended for children 12 and under, including kids' dirtbikes and all-terrain vehicles, that contained more than a specified amount of lead in any accessible part.

The details of the three-year battle to exempt kid-sized dirtbikes and all-terrain vehicles from the CPSIA - including the efforts of tens of thousands of AMA members -- can be viewed at http://www.americanmotorcyclist.com/Rights/KeepKidMotorcyclesAndATVsLegal.aspx.

About the American Motorcyclist Association
Since 1924, the AMA has protected the future of motorcycling and promoted the motorcycle lifestyle. AMA members come from all walks of life, and they navigate many different routes on their journey to the same destination: freedom on two wheels. As the world's largest motorcycling rights organization, the AMA advocates for motorcyclists' interests in the halls of local, state and federal government, the committees of international governing organizations, and the court of public opinion. Through member clubs, promoters and partners, the AMA sanctions more motorsports competition and motorcycle recreational events than any other organization in the world. AMA members receive money-saving discounts from dozens of well-known suppliers of motorcycle services, gear and apparel, bike rental, transport, hotel stays and more. Through the AMA Motorcycle Hall of Fame, the AMA honors the heroes and the heritage of motorcycling for future generations. For more information, please visit AmericanMotorcyclist.com.