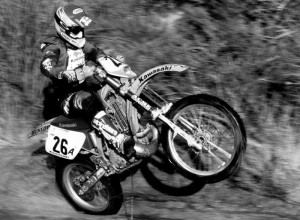 The AMA Motorcycle Hall of Fame is pleased to announce the next member of the induction class of 2012. Ty Davis, one of the most versatile off-road motorcycle racers of the 1990's, will be inducted into the Hall of Fame as part of the 2012 AMA Legends Weekend at the Red Rock Resort in Las Vegas, Nevada, Nov. 16-17.

"If it involved an off-road motorcycle, Ty Davis probably raced it," said Jeffrey V. Heininger, chairman of board of the American Motorcycle Heritage Foundation, which oversees the Motorcycle Hall of Fame. "Breaking into the pro scene in AMA Supercross, it didn't take long for this multi-talented racer to start earning AMA No. 1 plates in other disciplines as well. Congratulations, Ty, we look forward to welcoming you to the AMA Motorcycle Hall of Fame this November."

Born in Bakersfield, California, in 1969, and raised in Hesperia, California, Davis was encouraged by his father to start riding at an early age. Despite his dad's affinity for desert racing, Davis said there was no pressure for him to start competing at a young age.

"I just loved riding," Davis said. "I would just go out there and ride in circles. Did I want to become a racer? No. When they had races, I kind of shied [away] from it. But then when I finally started, around 12, I did OK. Then I did another race, and I was hooked. My dad, though, said it was too extreme to race desert and that I should race motocross, as he was trying to qualify for the [International] Six Days [Enduro] team, so we didn't do much desert racing after that."


"The biggest thing about the 125cc title was the story behind the scenes."
- Ty Davis

Davis developed into a top regional amateur motocrosser, winning the Golden State National Championship in the 250cc Pro class in 1987 then both the 125cc and 250cc TransCal Series championships in 1988. Davis' most high-profile title was the 1990 AMA Supercross 125cc West Region Championship when he beat future AMA Supercross star and Hall of Famer Jeremy McGrath.

"The biggest thing about the 125cc title was the story behind the scenes," Davis said. "I bought my own two bikes, and [fellow racer] Jimmy Button and I were driving our own vans to the races. I just raced a production bike out there, but I had the determination. The previous year, I had a factory ride with Suzuki. I remember telling [future Hall of Famer] Bob Hannah [who was managing the Suzuki team at the time] that if I don't win the 125cc Supercross title next year that they should fire me right after the series was over.

"Well, it was a tough year," Davis remembered. "My mechanic was a different breed -- he left me in Idaho one time -- and I finished fourth in the points. I thought I might still have a deal, but Suzuki called and said they wanted the bikes and box van back. Suzuki had an opportunity to hire some other riders when those riders' deals at Honda fell through, so they did. Since I had no signed contract I was out. But I knew the production Hondas could run with the Suzukis, and I bought some Hondas and raced on my own. I got some back door help from Honda because I did some R and D work for them, but I was pretty much on my own."

Davis pointed out of the 125cc class and had to move to the 250cc class the following year.

"Mentally, I wasn't ready for the 250 class," Davis said. "I needed another year to mature in that class. I did it for year, and I just got tired racing week to week and not making any money. That's when ATK called, and they offered me a bunch of money to win the [off-road] White Brothers Four-Stroke Nationals."

Davis accepted ATK's offer and raced the series after the AMA Supercross season concluded, winning the 500cc and 600cc titles and then competing in the famed Baja 1000 desert race.

"The first year I raced the Baja 500 for ATK, they took care of me," Davis remembered. "They screwed up in the pits and never changed my filter. We lost the race by 17 seconds, but they were so happy, and since they realized they screwed up, they gave me my win-bonus anyway. The next year, I had an opportunity to ride for Kawasaki. Kawasaki had a better program, but ATK was offering me more money. I decided to go with Kawasaki, but then ATK calls and doubles their offer. I ended up taking the money and spent most of the year hurt. The money I thought I was going to make, I spent on doctor's bills."

In 1993, Davis moved to Kawasaki. Although he was on the winning Baja 1000 team four times, from 1993-96, he was still finding his speed in individual events.

"I either got my [butt] handed to me by LR [Hall of Famer Larry Roeseler] or I couldn't beat Danny [Hamel] in the desert," Davis said. "[Hamel] can hold it on wide open. He had good vision. I'm this motocrosser, I don't look half way across the valley. I decided that if I'm going to stay at Kawasaki that I need to find another place where I can be the hero. That's when I looked at doing the AMA National Enduro Championship."


"I decided that if I'm going to stay at Kawasaki that I need to find another place where I can be the hero."
- Ty Davis

Davis said Kawasaki told him if he was leading the enduro points after the first three rounds in 1995, he could race the entire series. He was, he did and Davis that year earned Kawasaki its first, and only, overall AMA National Enduro Championship. Davis repeated the championship in 1999 riding for Yamaha, giving them their first enduro championship, and also found his speed in the desert, winning the AMA National Hare & Hound Championship in 1997, 1998 and 2002.

Davis' success hasn't been limited to the racecourse. In 2001, while still actively competing at the highest levels, Davis started Zip-Ty Racing Products, which continues to sell high-performance specialized parts for off-road race bikes.

"I knew I was getting older and I knew that after being through this industry and how small it is that I had to look for something for the future," Davis said. "It's amazing how many aftermarket products out there didn't fit the bikes they were sold for. My dad had a machine shop, and he'd make some parts for me. He would always make extras, and friends would want them. That's how I started. First, there were the wheel spacers -- a simple little product -- and then this removable shark fin [a rear brake disc guard]. Then with the four-strokes so popular, we came out with the Zip-Ty fuel screw [which allowed for easier carburetor tuning], and that took off."

Today, Davis continues to run Zip-Ty Racing, sponsor factory teams and riders, and compete. He says he's honored to be recognized by the AMA Motorcycle Hall of Fame.

"It's amazing, really," Davis said. "To be honored with so many of the guys I raced against and those who I've looked up to is humbling. Being in the Hall of Fame is a huge honor, and I'm excited to be recognized like this."

Tickets for the AMA Legends Weekend are now available through this online registration form: http://events.r20.constantcontact.com/register/event?oeidk=a07e5r7zy8ea4316694&llr=vw9ldxbab or by calling (800) 342-5464.

The AMA Legends Weekend will be held at the Las Vegas Red Rock Resort, a world-class spa, hotel and casino, featuring a range of entertainment, dining and family-friendly attractions. The facility's expansive ballrooms provide a stunning backdrop for the AMA Legends Weekend. Room reservations are available now at a special group rate by calling (866) 767-7773 and referencing group code RCIAME or AMERICAN MOTORCYCLIST. Online room reservations are available at www.redrocklasvegas.com.

More information about the AMA Motorcycle Hall of Fame can be found at www.motorcyclemuseum.org.


About the American Motorcycle Heritage Foundation

Founded in 1990 by the American Motorcycle Heritage Foundation, the goal of the AMA Motorcycle Hall of Fame Museum is to tell the stories and preserve the history of motorcycling. Located on the campus of the American Motorcyclist Association in Pickerington, Ohio, the Museum's three major exhibition halls feature the machines and memorabilia of those who have contributed notably to the sport. The AMA Motorcycle Hall of Fame Museum recognizes individuals who have made significant contributions to motorcycling, including those known for their contributions to road riding, off-road riding and all categories of racing, as well as those who have excelled in business, history, design and engineering. More information can be found at www.motorcyclemuseum.org.