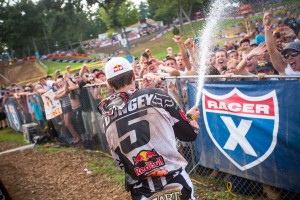 Red Bull/KTM Factory rider Ryan Dungey claimed his seventh win of the season at the ninth round of the Lucas Oil Pro Motocross Championship Series at the legendary MX-338 race track.

When the gate dropped for the first moto, Dungey leaped off the line to a decent start and came around the first corner in 3rd position. He quickly passed Phil Nicoletti to take over the 2nd place spot by the start of lap two. Dungey then began to reel in the lead ride of Mike Alessi. At the halfway point of the race, Dungey was able to move past Alessi and take over the front spot. Dungey continued to charge while out front and pulled out to a 16 second lead by the end of the moto to capture the first moto win.

Dungey launched out to a better start in moto two and put his KTM 450 SX-F into the lead position within the first few turns. He quickly pulled out to a 7 second lead on the rest of the field. It was looking to be an easy race for the Red Bull/KTM rider until he cross-rutted near the halfway point and crashed. During the crash his gas cap fell off and he lost a large amount of fuel. Dungey quickly recovered and returned to racing in the 2nd place position. Within the next two laps, he caught and passed Alessi for the lead again and began to pull out front. His Red Bull/KTM Team was nervous that too much gas had been lost and they decided to have him come in for a quick fuel stop. With the help of some of the KTM off-road mechanics that were there to assist with Mike Brown and Kurt Caselli they made a quick and efficient fuel stop and Dungey returned to racing action with a full tank only losing one position to Tyla Rattray. 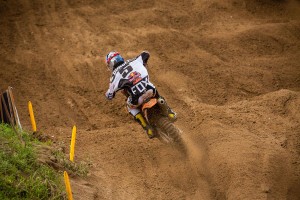 With four laps remaining, Dungey tried to close the gap on Rattray to retake the lead. Unfortunately, he was not able to make the pass, but he was able to hold on to a 2nd place finish which earned him his seventh overall victory of the season. With three rounds remaining, Dungey now holds an 85 point lead in the championship point standings. 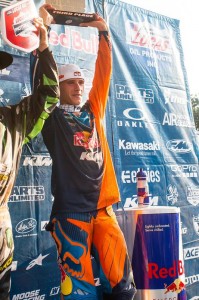 Red Bull/KTM Factory 250 Motocross class rider Ken Roczen returned to the podium for the ninth round of the Lucas Oil Pro Motocross Championship with a 3rd place overall finish. His teammate, Marvin Musquin, finished 4th overall for the day at the MX-338 race track.

When the gate dropped for moto one, Roczen was sitting in the bottom ten while Musquin earned a 2nd place start. Musquin dropped temporarily to 3rd on the 2nd lap but was able to put his KTM 250 SX-F back into the runner-up position by the sixth lap. At that point, he held on the gas and was able to maintain his position through the remainder of the moto to earn his best finish of the season.

Meanwhile, Roczen worked his way up from a 10th place start to 6th position by the second lap of the race. At the halfway point, he moved up two more positions and was able to secure 4th place. From there, he put 17 seconds on the 5th place rider as he tried to close in on the top three. Unfortunately, he was unable to close the gap before the moto end and remained in 4th when the checkers flew.

The Red Bull/KTM teammates switched starting patterns in the second moto. This time, it was Roczen with a great start while Musquin was stuck back in 8th place off the gate. Roczen started 2nd in the first moto and quickly passed Jessy Nelson for the lead by the start of the second lap. Roczen maintained the lead for the majority of the moto with heavy pressure coming at the two lap board. It was on this lap that Blake Baggett began to apply heavy pressure to take the lead. Baggett passed once and Roczen was able to put a wheel on him and sneak back into the lead. On the second attempt, Baggett made the pass stick and took over the lead. Roczen held on for a hard fought 2nd place. Musquin came from an 8th place start to move into the top five and take 5th overall in the second moto. 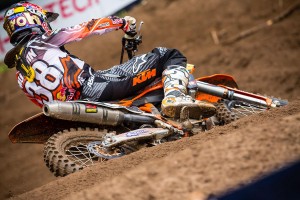 Roczen's 4-2 moto finishes earned him the final spot on the podium with a 3rd place overall result. His teammate's 2-5 results placed him in 4th overall for the day.

"I am really happy with my finish today," claimed Roczen after the race. "I felt much better at this round than I have in the past couple races. I felt like I had the speed to win a race today. Unfortunately, I wasn't able to get the win but I am a step closer than I was before and am excited to have my confidence back." 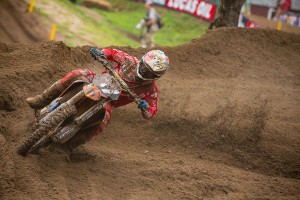 Stewart qualified 7th fastest in the combined practice times to earn a good gate pick for the start of the first moto. His gate choice paid off and he scored a top ten start when the gate dropped for moto one. At the end of the first lap he was sitting in 9th place. Stewart continued to maintain his pace and was able to move up two positions by the halfway point. From there, he remained consistent and was able to grab one more position with two laps to go. When the checkered flag flew, he crossed the line in 6th position.

In moto two, Stewart suffered from a poor start and was sitting outside the top fifteen around the first corner. After the first lap he had moved to 14th. On lap two, he managed to pass three riders and moved into 11th. He began to close in on the top ten group and had climbed up to 8th by the halfway mark of the race. He continued to charge forward and was able to pick up on more position by the end of the moto. His 6-7 moto finishes earned him a solid 6th place result.