Much Of California's Johnson Valley Riding Area To Be Off-Limits 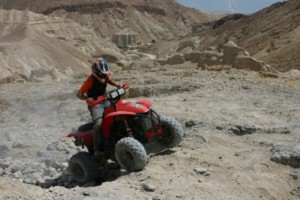 The Department of the Navy has released a final environmental impact statement for the expansion of a Marine base in California that calls for closing a large portion of the popular Johnson Valley Off-Highway Vehicle Riding Area, the American Motorcyclist Association reports.

The preferred alternative spelled out in the final environmental impact statement would allow public use of only 40,000 acres of the 190,000-acre Johnson Valley OHV area, and for only 10 months a year. Johnson Valley is currently under the jurisdiction of the U.S. Bureau of Land Management.

The final environmental impact statement is part of an effort by the Marine Corps Air Ground Combat Center at Twentynine Palms in San Bernardino County to expand its land holdings to allow for more live-fire training. The Marine Corps is part of the U.S. Navy.

The Navy released the final environmental impact statement on July 27, with a comment deadline of August 27, and plans to issue a record of decision to finalize its proposal on Sept. 28. But the proposal would still need congressional approval. The military hopes to begin training on the land in 2014.

"While we certainly believe that the Marines Corps, like all of America's military branches, should be the best trained in the world, we don't believe that it is necessary to ban off-highway vehicle riders from the area to accomplish that mission," said Nick Haris, the AMA's western states representative. "We, and other concerned off-highway recreation groups, will continue working with the military and Congress to ensure the needs of both the military and the OHV community are met."