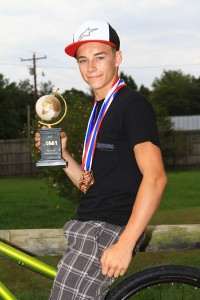 "These riders gave it their all to win an AMA national championship No. 1 plate on the world's biggest stage of amateur motocross racing at Loretta Lynn's," said AMA Director of Racing Joe Bromley. "Once again, event organizer MX Sports delivered an outstanding experience for hundreds of racers across a wide range of age and skill levels, from the stellar track conditions to the closing ceremonies."

One of the most impressive riders of the week was AMA Racing Motocross Horizon Award winner and Honda rider Zach Bell from Cairo, Georgia. Bell swept all three motos in the 250 A class and finished third in the Open Pro Sport class, winning the final moto.

"It's a great feeling," Bell said. "I've worked all my life to get to this point, and I wanted to make my last year my best year. I came out with the Horizon Award and now it's time to move to the pro ranks. Amateur ranks were fun, but now it's time to move on and see what we can do at the pro level."

Bell will go pro this season, finishing out the year in the Lucas Oil AMA Pro Motocross Championships in the 250 class, but he says he'll always have good memories of his amateur career.

"You always have fun out there (at Loretta Lynn's)," he said. "The fans are great. The track is awesome."

Bell has some simple advice for youth riders hoping to follow his tracks to the pros.

"Put yourself in a good position to get a good ride, work out to stay in shape, do your motos, keep your fitness strong, and stay focused on your goals," he said.

"I have been attending the AMA Amateur National Motocross Championships as a rider or an official since the 1970s," said AMA Motocross Manager Kip Bigelow, who competed in the Masters 50+ class this year. "This was, without question, one of the most exciting and electrifying AMA Amateur National Motocross Championships ever. From Zach Bell's Horizon Award to the return of Ricky Carmichael, who has achieved unmatched status in the pro ranks yet came back to chase another AMA national No. 1 plate in the Junior 25+ class, this year will be remembered for a long time."

Carmichael's return was a highlight for both competitors and fans alike. Carmichael, who retired four years ago as the most prolific champion in the history of AMA Pro Motocross competition, won all three of his Junior 25+ motos handily. The Havana, Florida, rider did not go unchallenged, however. Reynard caught and passed Carmichael on the opening lap of the third moto before Carmichael re-claimed the lead.

Another notable finish by a former pro champion was Masters 50+ winner Gary Semics from Salem, Oregon. Semics, who was the 1974 AMA Supercross 500cc champion, swept all three motos to take the Masters title.

A full list of the 2012 champions from the AMA Amateur National Motocross Championships is below. For complete results from the week of racing, see www.mxsports.com.

MX Sports has organized the AMA Amateur National Motocross Championships since 1982, when the event moved to its current location at the Loretta Lynn Ranch in Hurricane Mills, Tennessee. There, every summer, it crowns the country's top amateur motocross racers. A list of past champions includes such superstars as Carmichael, Stewart, Jeremy McGrath, Travis Pastrana, Kevin Windham, Ryan Dungey, and more.

About the American Motorcyclist Association