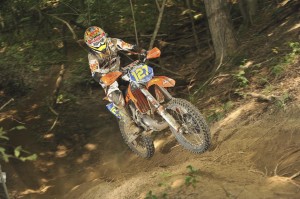 Factory FMF/KTM rider Russell Bobbitt earned 2nd overall at the seventh round of the OMA Nationals.

Bobbitt got off to a great start, earning the holeshot and leading the first lap of the race. He continued to lead for the second lap of the race before losing the lead to Paul Whibley. Bobbitt was able to stay close to Whibley and held on to 2nd place.

"Today's race was challenging," commented Bobbitt after the finish. "It was hot and dusty and the laps were short which made the dust worse. Overall, I am happy with my finish but am looking to get a win before the end of the season." 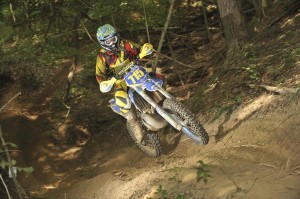 Nick Fahringer earned 3rd overall at the seventh round of the OMA Nationals after bouncing back from a poor start - Photo: Mark Kariya[/caption]

Husaberg Factory rider Nick Fahringer earned 3rd overall at the seventh round of the OMA Nationals after bouncing back from a poor start to finish inside the top three.

Fahringer got off to a rough start at the beginning of the seventh round of the OMA Nationals and lost two minutes to the early leaders of Russell Bobbitt and Paul Whibley. Fahringer regrouped around the halfway point of the race and was able to run consistent lap times with the leaders to hold them from stretching their lead. At the end of the hot and dusty race, Fahringer collected a 3rd place finish.

"I struggled with some mistakes early in the race, but luckily, was able to pull it together at the end," stated Fahringer. "I am still hoping to pull out a win before the end of the season and will continue to push as hard as I can in my weekly training to achieve that goal." 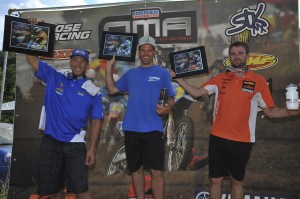