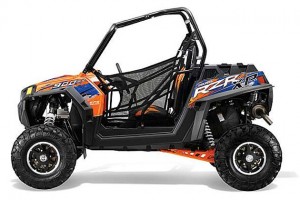 Polaris recently revealed their new limited edition UTV lineup for the 2013 model year, and I can hardly wait to test drive the newest Ranger RZR XP 900's. There are two different versions of my favorite UTV coming out soon - the Orange Madness/Blue LE and the Stealth Black/Evasive Green LE. Both models have all the fine tuning and other great features of the base model, but they each come with a few extras.

The Orange Madness model has the Orange Madness colors emblazoned on the seats as well as the dash, hood, control arms, trailing arms and rear radius rods so there's no mistaking this custom model for another UTV when you're out tooling around. Polaris also put a set of [mageProductLink sku="337-3379" title="ITP BajaCross Rear Tires"]BajaCross[/mageProductLink] tires and 12-inch Black Crusher rims to give the UTV a fierce edge from the ground up. This is a really bold look that will make you look forward to washing off the day's mud and dirt so you can show off your unique UTV. 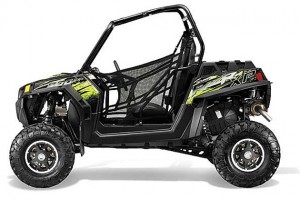 The Stealth Black/Evasive Green LE RZR has a low-profile black paint job that has splashes of green.[/caption]

The Stealth Black/Evasive Green LE RZR is nowhere near as flashy as its custom counterpart. In fact, it's quite the opposite, with a low-profile black paint job that has splashes of green. This model is also supposed to cost a bit less. Perhaps this is because Polaris isn't incorporating the color scheme in quite the same intensity as the Orange Madness version. However, the RZR logo is embroidered on both seats to match the green and black theme. This bike has the same tires and wheels as its brighter brother, but what it doesn't share is the electronic power steering (EPS). This feature is reserved for the Orange Madness LE, but I'm sure it wouldn't be impossible to have the ATV accessory added on to this ride if you prefer the color scheme.

Aside from the color, EPS and price, there isn't a lot to set these bikes apart from the original. They each have the same 88-horsepower twin engine, low center of gravity and 13 inches of ground clearance that make me love the original model so much. These limited edition UTVs just give you the chance to stand out from the crowd.