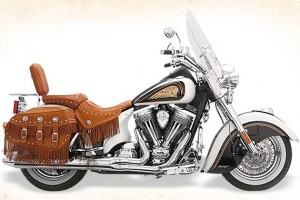 The 2013 Indian Chief Vintage Limited Edition is decked out with loads of chrome features and a two-tone, pearl white and thunder black paint job.[/caption]

I've been on quite a retro kick lately, and my love of throwback designs deepened when Indian Motorcycles unveiled the 2013 Chief Vintage Limited Edition(LE). First of all, this motorcycle is one of the most elegant cruisers I've seen in a while, as it's decked out with loads of chrome features and a two-tone, pearl white and thunder black paint job. The chrome parts of the bike include the highway pegs, an arrow-style shift rod, the grab tail, and the fender tips. This LE also has a detachable passenger backrest that makes it stand apart from other Indians on the road.

The manufacturer is only making 35 of these custom rides, but they will be producing regular Chief Vintage bikes with Indian Red, Indian Red with Ivory Cream, and Willow Green with Ivory Cream color options. I suppose you could probably purchase a standard Chief, get it painted like the LE and then install cruiser accessories like a detachable luggage rack yourself, which would probably cost about as much as the extra $2,000 for the LE. 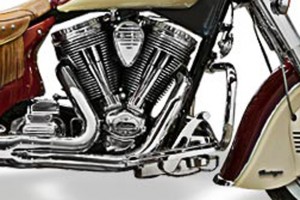 When it comes to the engine, the LE is exactly identical to the standard Chief Vintage.[/caption]

When it comes to the engine, the LE is exactly identical to the standard Chief Vintage. Both bikes have Power Plus, air-cooled 105ci engines with six-speed transmissions. They also come with distressed leather saddlebags with plenty of fringe, yet another nod to the old-school rider. The wheels of the LE and the standard model are no different either. Each bike has chrome-spoke wheels with a set of classic whitewall tires.

These bikes are not for everyone, but they really appeal to my sense of nostalgia. They're gorgeous machines and beneath the retro surface, these motorcycles are built to last. With a five-gallon fuel tank, you could easily take a long trip just to show off your classic Indian motorcycle. If you want to stay local, the removable saddlebags make it really easy to get rid of unnecessary weight, and you won't be the one in charge of hanging onto everyone else's stuff. However, you'll probably be the envy of your motorcycle club, your neighbors, coworkers and pretty much anyone who sees you riding on this stunning bike.